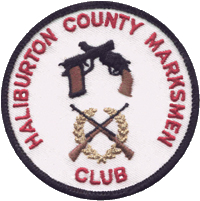 The HCMC was originally founded in April 1980 at the Anson Hinden and Minden Township Gravel Pit. The club operated in that location until 1982 and pending the establishment of a new site, various members joined together in order to retain our club status.

In 1992 action shooting sports were introduced to the club and became an approved discipline. 1993 saw the introduction of handgun silhouette and the steel challenge speed shoot.

Also in 1993, the current structures, shooting position covers, shooting bench and baffles were constructed. This feat was accomplished over a 2 weekend period by diligent members of this club. All supplies, poles, timbers and steel roofing were donated by members as was the use of equipment to accomplish this.

In 1994 we had the option of purchasing an additional 68 acres to increase our holdings to 70 acres. Just a little over 2 acres are in use at this time. The purchase of the additional property was accomplished through a special fundraising fee from existing members.

Then in 2005 plans were made to construct a club house on the range property. This building was completed in time for the November 2006 Annual General Meeting. On a continuing basis, our members contribute to the upkeep of the club by physical means, ideas for improvement and monetarily by way of annual dues.